Employees Are Quitting Instead of Giving Up Working From Home

HomeInteresting, News, Remote workEmployees Are Quitting Instead of Giving Up Working From Home

A six-minute meeting drove Portia Twidt to quit her job.

She’d taken the position as a research compliance specialist in February, enticed by promises of remote work. Then came the prodding to go into the office. Meeting invites piled up.

The final straw came a few weeks ago: the request for an in-person gathering, scheduled for all of 360 seconds. Twidt got dressed, dropped her two kids at daycare, drove to the office, had the brief chat and decided she was done.

To read more articles based on your personal financial goals, answer these 3 questions that will tailor your reading experience.

With the coronavirus pandemic receding for every vaccine that reaches an arm, the push by some employers to get people back into offices is clashing with workers who’ve embraced remote work as the new normal.

While companies from Google to Ford Motor Co. and Citigroup Inc. have promised greater flexibility, many chief executives have publicly extolled the importance of being in offices. Some have lamented the perils of remote work, saying it diminishes collaboration and company culture. JPMorgan Chase & Co.’s Jamie Dimon said at a recent conference that it doesn’t work “for those who want to hustle.”

But legions of employees aren’t so sure. If anything, the past year has proved that lots of work can be done from anywhere, sans lengthy commutes on crowded trains or highways. Some people have moved. Others have lingering worries about the virus and vaccine-hesitant colleagues.

And for Twidt, there’s also the notion that some bosses, particularly those of a generation less familiar to remote work, are eager to regain tight control of their minions.

“They feel like we’re not working if they can’t see us,” she said. “It’s a boomer power-play.”

It’s still early to say how the post-pandemic work environment will look. Only about 28% of U.S. office workers are back at their buildings, according to an index of 10 metro areas compiled by security company Kastle Systems. Many employers are still being lenient with policies as the virus lingers, vaccinations continue to roll out and childcare situations remain erratic.

But as office returns accelerate, some employees may want different options. A May survey of 1,000 U.S. adults showed that 39% would consider quitting if their employers weren’t flexible about remote work. The generational difference is clear: Among millennials and Gen Z, that figure was 49%, according to the poll by Morning Consult on behalf of Bloomberg News.

“High-five to them,” said Sara Sutton, the CEO of FlexJobs, a job-service platform focused on flexible employment. “Remote work and hybrid are here to stay.”

The lack of commutes and cost savings are the top benefits of remote work, according to a FlexJobs survey of 2,100 people released in April. More than a third of the respondents said they save at least $5,000 per year by working remotely.

Jimme Hendrix, a 30-year-old software developer in the Netherlands, quit his job in December as the web-application company he worked for was gearing up to bring employees back to the office in February.

“During Covid I really started to see how much I enjoyed working from home,” Hendrix said.

Now he does freelance work and helps his girlfriend grow her art business. He used to spend two hours each day commuting; now the couple is considering selling their car and instead relying on bikes.

One of the main benefits, he says, is more control over his own time: “I can just do whatever I want around the house, like a quick chore didn’t have to wait until like 8 p.m. anymore, or I can go for a quick walk.”

Of course, not everyone has the flexibility to choose. For the millions of frontline workers who stock the shelves of grocery stores, care for patients in hospitals and nursing homes, or drop off packages at people’s doors, there are scant alternative options to showing up in person.

But among those who can, many are weighing their alternatives, said Anthony Klotz, an associate professor of management at Texas A&M University, who’s researched why people quit jobs. Bosses taking a hard stance should beware, particularly given labor shortages in the economy, he said.

“If you’re a company that thinks everything’s going back to normal, you may be right but it’s pretty risky to hope that’s the case,” he said.

At least some atop the corporate ladder seem to be paying attention. In a Jan. 12 PwC survey of 133 executives, fewer than one in five said they want to go back to pre-pandemic routines. But only 13% were prepared to let go of the office for good.

Alison Green, founder of workplace-advice website Ask a Manager, said she’s been contacted by many people with qualms about going back, citing concerns about unvaccinated colleagues and Covid precautions. Some have said they’re looking for jobs at companies they feel take the virus seriously, or will let them work from anywhere.

Some things are indeed lost with remote work, Green said, like opportunities for collaboration or learning for junior employees. But, she added: “I think we need to have a more nuanced discussion than: hustlers only do well in the office.”

For Sarah-Marie Martin, who lived in Manhattan and worked as a partner at Goldman Sachs Group Inc. when the pandemic struck, the months at home gave her time to redraw the blueprint of her life.

“When you have this existential experience, you have time to step back and think,” Martin said. “In my previous life, I didn’t have time to get super deep and philosophical.”

The mother of five moved her family to the New Jersey shore. And once the push to get back to offices picked up, the idea of commuting hardly seemed alluring. This spring, Martin accepted a fully remote position as chief financial officer of Yumi, a Los Angeles-based maker of baby food.

Gene Garland, 24, unknowingly opened the floodgates to people’s frustrations about office returns. After his employer, an IT company, in April told people they needed to start coming in, two of his close colleagues handed in their resignation letters. Garland, who lives in Hampton, Virginia, tapped out a tweet:

Hundreds of people responded, with many outlining plans, or at least hopes, to leave their own jobs. Garland says he himself has no plans to quit, but empathizes with those who do.

“Working inside of a building really does restrict time a lot more than you think,” he said. “A lot of people are afraid of the cycle where you work and work and work — and then you die.”

Twidt, the compliance specialist in Georgia, had already lined up a new job by the time she handed in her resignation letter: a role at a Washington-based company.

The recruiter that approached her, Twidt said, asked what it would take to get her on board. She replied that she would prefer something 100% remote.

“They said, ‘we can do that for you immediately.’”

— With assistance by Sridhar Natarajan 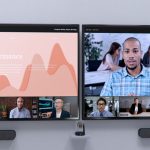 Next Story
5 remote work trends we will see in 2021